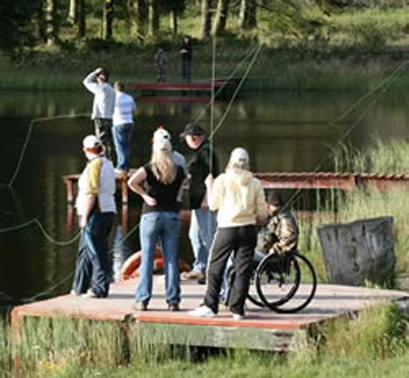 In 2003 Sergeant John Lees based at Giffnock Police Office, agreed to produce a youth diversity program involving angling and engaged Constables George Knight, John Stewart and Derek Whittle in the creation of this initiative.

Sergeant John Lees invented the acronym AFYD (Angling For Youth Development). George Knight there after created three logos one for Coarse Fishing, Game Fishing and Sea Fishing. It was decided that the logo for Game Fishing would be the logo of choice. However due to an administrative error in 2004 the Coarse Fishing Logo was incorrectly used for a number of years. The current Logo being the original choice.

AFYD originally struggled to secure funding as the officers involved at that time had poor skills in seeking such funds. George Knight through newspapers and magazines advertised for any person or organisation, which could help with setting up the initiative. In late 2003 Constable Grev Humphrey based in Blairgowrie contacted Constable Knight. Grev had numerous contacts and through this AFYD was funded and launched at the Eglinton Arms Hotel, Gilmour Street, Eaglesham on the 15th March 2004 supported by Daiwa Sports Ltd., East Renfrewshire Council, Eglinton Arms Hotel, Fly Fishing and Fly Tying Magazine (Mark Bowler), SANA, Scottish Power, Scottish Water, Professor David Bellamy, Jimmie Macgregor, Andrew Mactaggart and Chief Constable William Rae of Strathclyde Police.

After the launch George Knight and James (Jim) Kyle (SANA), realised that the organisation needed a structured course. Together they created the AFYD course. The course has been through numerous guises but has not changed in essence from today’s’ course of 8 modules.

AFYD from a small group of police officers has developed into an organisation which has roots in most regions of Scotland, Ireland and parts of England.

AFYD as an organisation remains independent of the governing body SANA and the government. However AFYD will continue where possible to assist and progress the involvement of all persons in angling so as to help preserve the fishing environment, engage young people, introduce new members to fishing clubs and most of all ensure the continued access to free coaching courses and education for all.